Louisiana State University began as the Louisiana State Seminary of Learning and Military Academy near Pineville, Louisiana in 1860. William Tecumseh Sherman was the first superintendent and he along with five faculty members taught the first students. The Seminary offered classes in engineering and liberal arts with strong military discipline. The following year, Louisiana joined other Southern states in seceding from the Union and Sherman resigned to join the United States Army. When the Civil War began, most of the students and faculty members left the Seminary to fight for the Confederacy causing the school to close. After a few attempts to reopen, the Seminary closed for the duration of the war in 1863.

The Seminary reopened in September, 1865 with David F. Boyd, one of the original faculty members, as superintendent. Although the building survived the war intact, most of the equipment and books were destroyed or missing. In June 1869, with meager resources but still managing to hold classes, the Seminary held a commencement ceremony for its first graduating class. On October 15, 1869, fire destroyed the seminary building and on November 1, the cadets moved to the State Institution for the Deaf, Dumb, and Blind in Baton Rouge. The following year, the Seminary was renamed Louisiana State University. 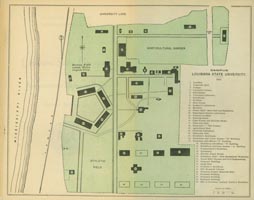 In 1886, LSU moved to the former military post in north Baton Rouge where the new state capitol is situated today. LSU had been steadily increasing the number of agriculture classes offered and needed more space for its experimental farm. By 1900, a major building program began with an auditorium, a new library, engineering shops, and more dormitory space. LSU began to field teams in football, baseball, tennis, and track and field, and students had a bit more time for recreation. In 1906, women were admitted on a regular basis and the law school was established.

By 1918, LSU was experiencing growing pains and President Thomas Boyd began looking for land to build a new and larger campus. Boyd had his eye on Gartness Plantation south of Baton Rouge along the Mississippi River. Several faculty members and prominent Baton Rouge citizens purchased Gartness until the state could come up with funding for repurchase. This property, along with portions of Arlington and Nestledown plantations, make up LSU’s present campus in Baton Rouge. With support from Governor John M. Parker and utilization of severance tax revenues, construction began in 1922 and by the fall of 1925, some classes were held on the new campus that was formally dedicated on April 30, 1926.

After Huey Long’s election as governor in 1928, funding for LSU became a priority. Long wanted LSU to be the best university in the nation and during the 1930s, and despite the Great Depression, the number of buildings, students, and courses grew and improved. During World War II, LSU became a major center for the Army Specialized Training Program. By 1947, GIs (many of whom were married with families, a rarity before the war) returning from the war increased the student population to just over 10,000 and another major building program took place to house and provide classrooms for the new students and their families.

Throughout the 1950s, 1960s, and 1970s, LSU would continue to grow and evolved from a teaching university with a mainly agricultural research component to an institution where teaching and research went hand in hand. Fueled by tax revenue from the oil and petrochemical industry, research in medicine, engineering, nuclear science, computers, and fisheries in addition to agriculture, flourished. Branch campuses opened in New Orleans, Alexandria, Eunice and Shreveport.

During the 1980s and into the mid-1990s, LSU suffered from declining revenue from the oil and gas industries and was, along with other Louisiana colleges and universities, embroiled in an expensive federal lawsuit alleging that the state operated a dual system of higher education in violation of the Civil Rights Act. The lawsuit called into question every program offered by all universities and required court approval for any new funding or academic programs. By the late 1990s, LSU had begun to recover from the setbacks from the 1980s and is now a land, sea, and space grant university with Research I status and a student body of nearly 30,000.